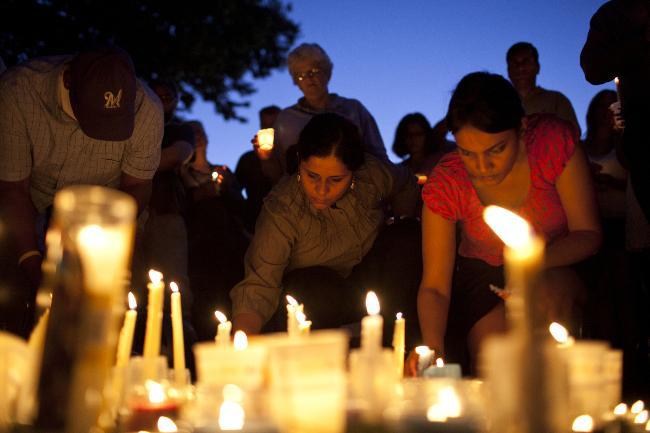 Yesterday our community of Oak Creek, Wisconsin was the location of what at this time is being investigated as a possible “incident of domestic terror”. Wade Michael Page, a 40 year old man, opened fire during Sunday morning worship at the Sikh Temple, killing six and critically wounding three before he was shot and killed by a member of the Oak Creek Police Department. One of those wounded was Oak Creek Police Lieutenant Brian Murphy, 51, he is currently in critical condition and is expected to survive.

As the news unfolded, I was glued to social and news media. I quickly learned that a friend’s husband was a responder to the shooting. My heart jumped… I was in their wedding, they are dear to me. I prayed for his safety and for his wife’s nerves to be calmed.

Our good friend, Tom, was one of the first news reporters on the scene, which came as no surprise considering that he’s also a member at our church, which is located about two miles from the Sikh Temple in Oak Creek. Our second morning service was just beginning at 10:30 AM when the first 911 calls for help were made from within the Sikh Temple.

The action unfolded slowly over the course of six hours and was extremely tense in the beginning–there were reports of multiple shooters and a report that one shooter may have left the scene and been unaccounted for. The latter report was eventually announced as false, and until it was I admit I was fearful for my friends. I watched as Tom interviewed a member of the Sikh Temple, a man who immediately forgave the assailant. I was challenged in my heart. Could I have been so forgiving if I were in his shoes?

The communities of Oak Creek and metro Milwaukee responded with tremendous unity and support for the Sikh Community–for this I am grateful. Everything I’ve come up with to try and editorialize these tragic events sounds flat. Yes, Oak Creek is a quiet community where no one would ever expect something like this to happen. But are there actually communities where anyone expects something like this to happen?

I have instead decided to keep my editorial at a minimum and offer these  suggestions for you, if you’d like to express support or offer prayers.

What you can do: